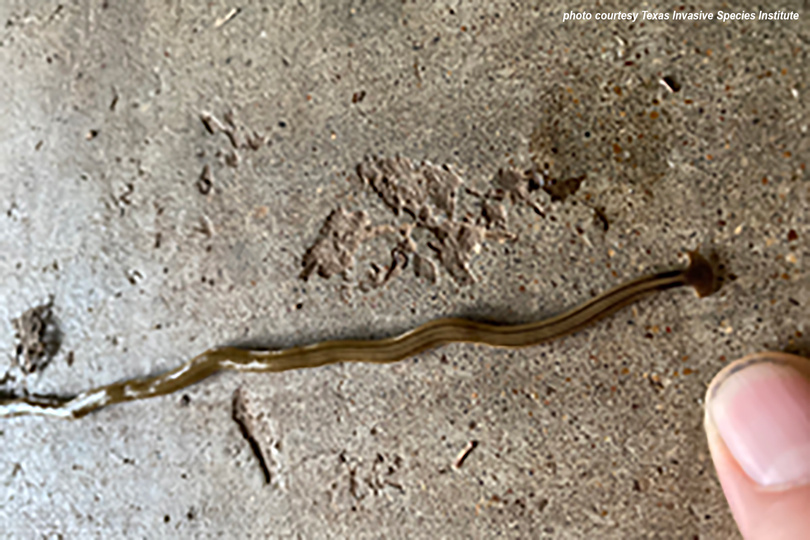 That’s because the invasive species has never been seen in this part of East Texas before, according to Lamar County AgriLife Extension Agent Jessica Humphrey.

“A lady messaged me on my Lamar County Ag & Natural Resources Facebook page asking what it was. She had one in her house,” Humphrey said in an interview with the Texas Farm Bureau Radio Network. “It looks like an earthworm, but instead of having a pointy head, it almost looks like the head of a hammerhead shark.”

Originating in Southeast Asia, the hammerhead flatworm likely entered the U.S. in the early 1900s aboard imported landscaping materials. It is a terrestrial flatworm, typically honey-colored with one to five dark stripes running the length of the body. The Texas Invasive Species Institute reports the body as being narrow, “snake-like” and up to 15 inches long, with 8-12 inches being the most common.

The hammerhead flatworm could be very detrimental to area agriculture if the population grew too large, since Humphrey said they are known earthworm predators.

“Earthworms are crucial for aeration of the soil and breakdown of the soil and things like that,” she said. “Right now, we’re finding them in lawns and gardens, but if they get bad enough, they’ll migrate to our crops and that would affect soil health.”

The creatures can reproduce via “fragmentation.” Any portion of the worm that is pinched off can begin to regenerate a new flatworm in about 10 days.

The species also secretes chemicals through the skin to make themselves noxious to predators. The chemicals can cause skin irritation in humans who handle the flatworm and in pets or other domestic mammals who consume the worms. They may carry parasitic nematodes, so Humphrey recommended wearing gloves and digging carefully when trying to catch a hammerhead flatworm.

“If you find them, dig them up whole and put them in a sealable plastic storage bag with salt to kill them, and then you can dispose of them in the bag after that,” she said.

Citrus oil and vinegar are other effective methods of extermination but must be applied directly to the flatworm. Placing them in a sealed bag or container ensures they do not crawl away after treatment.

Currently, there are no other known methods of control or bait that can eliminate the invasive flatworm without harming the ecologically-friendly earthworm, though Humphreys said there are several studies underway to find new chemicals or methods to control them.

She advised those who find a hammerhead flatworm to contact their local Extension agent to let them know it’s been spotted in that area. The Texas Invasive Species Institute also requests people to submit a photo and the location coordinates to Asley Morgan-Olvera atinvasives@shsu.edu so they may track the spread of the invasive species.

More information on the hammerhead flatworm is available at the Texas Invasive Species Institute and at TexasInvasives.org.